Flags are designed to simply be a representation of whatever you are wanting to display, be proud of, support or advertise. Some flags by design are very simple, some are rather complex and then there is the Union Jack. Its widely believed that due to the nature of the United Kingdom’s flag and countries that it represents that it’s one of the most complex flag designs ever created.

The flag itself  has been in place since around 1801. Its design however took a while to create and still remains very specific and it has a number of rules that many people might not be aware of. These rules have to be followed exactly and any changes actually have to go through Parliament. In 2008 an MP by the name of Andrew Rosindell tried to get the aspect ratio of the flag changed but this did not get past the first reading in Parliament before it was quashed. 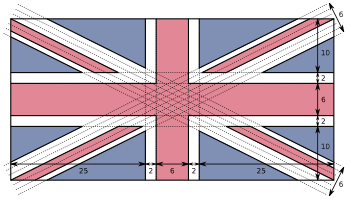 Flags that have the Union Jack in the canton should always be 1:2 to preserve the square fly area

The three component crosses that make up the Union Flag are sized as follows:

The crosses and fimbriations retain their thickness relative to the flag’s height whether they are shown with a ratio of 3:5 or 1:2

The Admiralty in 1864 settled all official flags at proportions 1:2, but the relative widths of the crosses remained unspecified, with the above conventions becoming standardised in the 20th century.In the 19th century, the Union flag was defined by the same blazon but could vary in its geometrical proportions.

The colour specifications for the colours Union Jack (royal) blue, Union Flag red and white are

Our Union Jacks can be purchased direct from our website https://piggotts.co.uk/products/flags/union-jack-national-flag/