The Legend of St George • Piggotts Flags and Branding

The story of St George, the patron saint of England, is a legend that has been told for centuries, how his bravery in slaying a dragon and saving a princess earned him his place in fabled history. The national flag of England is named after him. He has a day in his honour celebrated every 23rd of April but yet there are of course many questions surrounding this legend. Was St George English? Where did the dragon slaying take place? How is the English flag named after him? Was he actually a knight in the first place? How did the red cross on the white background come to be? Well, let’s take a look.

There are a few versions of St George’s life and very little actual information.

According to legend he was actually a Roman solider who was born in Turkey around 275-281 AD. George’s parents were Christians with Greek heritage. St George’s father was also a ranking officer in the Roman army and that St George is believed to have followed in his footsteps.

George is believed to have lost his parents at a very early age and at this point decided to offer his life for service in the army. By his late teens or early twenties George had already proved himself and had risen within the ranks of the army and was both well respected and feared for his skills. In 303 AD there seemed to have been some sort of disagreement between George and the then Emperor Diocletian over sacrifices that had been ordered to honour the Roman gods. St George refused and held strong to his beliefs and in the end was sentenced to death himself for his refusal and standing up to the Emperor.

On the 23rd April 303 AD George was put to death. Prior to his death, he gave away all his land and wealth to those who needed it. Once executed, his body was returned home where Christians came from far and wide to honour this brave soldier who soon become known as a martyr.

However, what of the dragon slaying and princess saving?

Well according to the legend and well known story, St George and the slaying of the dragon took place in Libya in a very little known location known as Silene. This town was besieged by a dragon who was meant to have brought a plague along with it to the town and residents. In order to keep the dragon at bay the town residents fed it sheep every day until the sheep ran out. Once there were no more sheep or livestock to feed the dragon, the people of Silene began to draw upon a lottery to see which town members would be sacrificed. This lottery found its way to the King’s daughter, The King was so distraught he offered the people of Silene all his wealth to spare his daughter, however the town’s folk were beyond needing his wealth and insisted that the princess be taken to the dragon.

The princess was taken to the dragon where upon chance St George happened to be riding by. The princess tried to get St George to leave and told him about the dragon but St George insisted on staying. Soon enough the dragon came, emerging from the lake that it lived in to take the princess. St George upon his horse made the sign of the cross, raised his lance and charged directly at the dragon.

His lance which he called “Ascalon” struck the dragon in the neck cutting it deeply and sending the dragon to its knees. St George bound the dragon and with the princess brought it back to the town of Silene and told the residents that he would kill the dragon if all the residents converted to Christianity and be baptised. According to the legend, almost the entire town converted. George killed and dismembered the dragon by the lake and it was taken away in ox carts. The site of the dragon slaying was ordered by the king to be blessed and a church was built to honour the event.

The St George’s Cross, as it’s known, forms the national flag of England and features within the Union Jack. The flag is believed to have been used as far back as the 10th century. It was a widely held belief during the Crusades that knight’s wearing the banner of St George would be protected in battle. The cross is meant to represent the cross of Christ but is not meant to hold any direct relation to St George himself. Richard the Lionheart is believed to have linked both St George and the red cross together and held them both in the highest regard, he used them on the standards which were carried in the crusades. 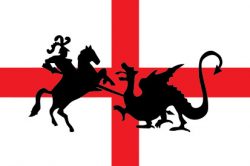 The flag itself was adopted by England in around 1190AD…

…but was used only for docking ships so that it would protect anyone mooring their ships in England. It was also worn by soldiers in the 13th century to ensure their association with Edward I. It was around this time that St George rose to become patron saint of England all cumulating in all other saints’ banners being abolished, except for the “St George Banner” in 1552.