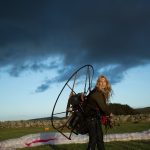 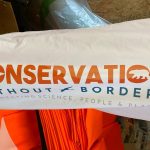 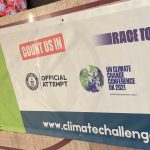 Global expeditioner, Sacha Dench, is attempting to circumnavigate around mainland Britain from Glasgow on June 18th, flying anti-clockwise around the coast and returning to land in Glasgow. Piggotts are proud to announce their assistance in the double record-breaking attempt to mark the UN climate conference in Glasgow.

The expedition will see Sacha fly over 3000 miles in a wind and green electricity powered paramotor. She hopes to set a new Guinness World Record for the fastest, and first, flight around Britain in a paramotor. It will also be the first long-distance expedition attempt with an electric paramotor.

Sacha and her ground crew will be trying to answer the question ‘Britain drove the Industrial Revolution; can we drive the Green Revolution too?’. The crew will travel in electric vehicles, interviewing people who are working hard to promote sustainable approaches that will help Britain achieve Net Zero by 2050. Celebrity supporters are also due to join Sacha en-route (names to be announced).
The expedition and campaign will be shared via live video updates from air, ground and underwater. The aim is to rally enthusiasm, optimism and ambition from the whole country to cut our carbon footprint. A compilation of the stories discovered on their expedition will be presented at COP26 in Glasgow in November.
From our warehouse in Witham, Essex, we have supplied Sacha’s team with 2 branded windsocks, a banner and 2 feather flags to help her and her team on their expedition which is expected to take a duration of six weeks in total to complete. Piggotts are proud to be one of many partners that have stepped up to help make this happen. We’re very grateful to have been considered to assist on this excursion and we wish Sacha and her team all the best in her world record attempt.

Conservation Without Borders is a charity founded by Sacha Dench to help drive changes in attitudes and bring answers to issues relating to climate change and biodiversity loss. Its strategy is to turn these global challenges in to great adventures which will bring together the wider public, media, scientists, industry and communities through expedition led story telling – and drive positive action.