The national flag of the United Kingdom, the Crown Dependencies and Overseas Territories is the Union Flag, which may also be called the Union Jack. The origin of the first Union Flag dates back to 1606 and combined the flags of England and Scotland. The present Union Flag dates from a royal declaration in 1801 when St Patrick’s Cross was added to represent Ireland at that point it became possible to display the flag upside down.

Throughout the years the Lord Chamberlain’s Department, through the Department for Culture, Media and Sport and the national Executives had always issued a list of Flag Days on which UK Government buildings should fly the national flag. So they couldn’t just hang a union because they were feeling patriotic that day, it had to be for an official reason. In 2008 however, Gordon Brown shook things up and scrapped a rule that said the Union flag could only be flown on certain days, he said it should be left to individual public offices to decide if and when to fly flag. However with this new guidance of 2021 the Culture Secretary Oliver Dowden has taken this one step further still and is insisting that all government buildings, local and national should be flying the union every day, 365 days of the year. During his announcement he said: “The Union flag unites us as a nation and people rightly expect it to be flown above UK government buildings – this guidance will ensure that happens every day.” This will only affect buildings in England, Scotland and Wales, so let’s get this the push it needs to show our civic pride as a nation, our flag is a symbol of liberty, unity and freedom.

Starting in June 2021, part of the whole announcement will mean you can now hang 2 flags on a single flagpole, which is also known as dual flagging. So if you want to advertise your own brand, your county or any bespoke flag but only have one flagpole – it’s not an issue. You have to make sure of one thing though – the Union is flying highest.

If you are in need of a Union then Piggotts is the place to go, we have been producing and installing a range of Union flags for over 200 years for our clients. These do include a lot of government buildings, local authorities and historical buildings and some of our flags have been proudly flying over important parliamentary buildings such as Victoria Tower on the palace of Westminster and Portcullis House, next to Big Ben. These two examples have measured over ten metres long and to date are still some of the biggest we make – so nothing is too big for us to handle. 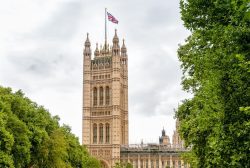 All our flags are produced to suit your requirements and your budget, from sewn to printed, big to small, we can design, produce and even install the flags you need. Our range of printed and sewn Union flags on knitted and woven polyester are outdoor rated and suitable to be flown all year round, using our flag care advise is the best way to keeping your flags in the best condition for as long as possible. Proper flag care is important because part of the UK flag protocol states that if a Union becomes tattered, faded or soiled it should be replaced.

So if you need new Unions to be able to fly all year round contact our sales team on 01376 514372 or sales@pfandb.co.uk  and they can help you further to ensure your flags are produced to the highest standard and are kept in tiptop condition.