On a Speaker’s Platform

When displayed from a staff, on a speaker’s platform, the senior national flag should be placed on the right-hand side of the speaker, and therefore to the audience’s left.

For interior or parade use a ‘dress flag’ may be used. This is sometimes made of silk or satin with a fringe around three sides. The fringe can be gold or red/white/blue for the Union Flag, red/white for St. George’s Cross, blue/white for St. Andrew’s Cross and green/white for the Red Dragon. The fringe is purely decorative.

Sometimes it may be desired to display two flags when only one flagpole is available. As long as both flags are British this is possible. The senior flag should fly at the top, with a gap of about 30cm (12”), assuming there is enough vertical space on the pole. For example, the Union Flag can be flown over the flag of England, Scotland or Wales (as shown), or over a county, city or house flag. When flags are at half-mast the lower flag must be removed.

As a Pall for a Coffin

If a national flag is to be used on a coffin, it should be placed so that the top-left corner of the flag is over the deceased’s left shoulder. The flag should be removed before interment or cremation and folded. If the flag is to be retained by the next of kin, it can be folded using the Royal Navy’s method shown here, based on a 1:2 flag (138cm x 276cm) with no fittings (i.e. ropes, toggles or clips), or using the method shown.

A Coffin with a Fitted Cover

2, Keeping the Union Flag taught it is then folded in half (lengthways) a second time

3, A straight fold of 1/14 of the flag’s length (20cm on a casket cover) is taken from the foot of the Union Flag. This fold may not be necessary, or may need to be a different length, depending upon the shape, size and material of the flag being folded – practise first!

4, The first triangular fold is made ensuring it is within 5mm of the straight edge

5 – 7, The triangular folding procedure continues until it reaches the head of the Union Flag

8 – 9, Any remainder is tucked away into the fold of the triangular shape

10, The Union Flag ready for presentation 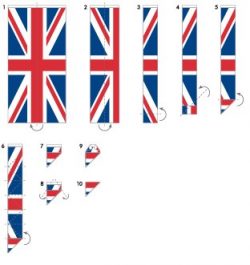 When flags are painted onto a vehicle, or on the tail fin of an aircraft, the flag on the port side should show the obverse of the flag (i.e. the flagpole on the left), while that on the starboard side should show the reverse (i.e. the flagpole on the right). On surfaces perpendicular to the direction of travel (e.g. the back of the vehicle) the obverse of the flag should be shown.

When flag shoulder patches are worn on uniforms the flag on the left shoulder or sleeve should show the obverse of the flag (i.e. the flagpole at the wearer’s front). If there is a patch on the right shoulder or sleeve it should show the reverse of the flag (i.e. still with the flagpole at the wearer’s front). If more than one flag is to be worn, the Union Flag should be at the top.

Civilian marine facilities should fly the Civil Ensign (the undefaced Red Ensign) as their national flag, unless they belong to an organisation that holds a warrant for a special ensign, when that ensign should be used instead.

Civilian air facilities, such as airports and airfields, should fly the Civil Air Ensign as their national flag, rather than the Union Flag. They may additionally fly the flag of England, Scotland or Wales and the appropriate county flag.

It is sometimes impractical to fly a full-size flag throughout the year – flags can wear out quickly, especially if they are flown in adverse conditions. Bare flagpoles are a sad sight. The pennant, or vimpel, is a solution to these problems. The long narrow streamer-like flags are designed to be left flying day and night. The optional single point attachment and the narrow tail reduce wear and their length means that they can be easily repaired.