Piggotts and our Country's Counties' flags • Piggotts Flags and Branding

A flag is directly linked to the entity that is normally displayed upon it. It conveys, reinforcing the notion and status of that entity. As part of the efforts to strengthen the identity and recognition of the nation’s counties, the flag is a highly effective way of representing not just only your country or your brand. However more and more local counties are now creating their own. We look at this in this week’s blog.

Flags flying for counties that some might have mistakenly thought long gone, such as Middlesex or Westmorland, will immediately correct that misapprehension – if there is a county flag, then there is a county represented by it. A flag to some extent may thus convey a greater reality to its county, without one a county might seem a touch insubstantial.

The pursuit of these flags was energised by the establishment in the last decade of a registry by the UK’s Flag Institute (FI). Founded in 1971 this organisation is one of the world’s leading research and documentation centres for flags and flag information plus a government advisor. With a recent increase in local and regional flags, the FI’s registry was devised as a definitive record of their number.

Whilst ostensibly intended to serve as a record book however, there being no “UK Flag Act” that might “authorise” such county flags, it effectively serves also as the de facto authority which endorses them. The criteria (following) laid down for inclusion in the registry emphasise the authoritativeness of the record, designs are not accepted without question but have to demonstrate a definite usage or acceptance.

Prerequisites for registering a flag

A “banner of arms” refers to the practice of extending the design from the shield found in a coat of arms, to a rectangular piece of cloth to be deployed as a flag. All bodies or individuals, who have been granted coats of arms by the heraldic authorities (in England and Wales the College of Arms), may display them in this fashion including county councils.

It is often generally assumed that arms granted to a county council also represent the county it administers as an entity in its own right and that a banner of such arms is therefore the county flag; this is not the case. Coats of arms and banners formed from them may be legally used only by the body to whom they have been granted and individual citizens have no automatic right to display or fly such banners without specific permission, a fact generally ignored by commercial flag producers and vendors who often market banners of council arms as county flags.

Such council arms frequently include symbols or devices that are locally familiar and often the same or similar versions of symbols found on council arms will be seen on the badges of county sporting bodies or fire and rescue services, so there is a clear association of symbol and county.

Although individual elements from council arms may therefore be worthy of inclusion in a county flag the arms themselves in most cases do not make good flags. Aside from the legal restrictions on their use there are also stylistic objections to the use of council arms as county flags.

As heraldic contrivances the designs are often complicated or “fussy” – replete with motifs and colours that might serve well on a town hall wall but do not work too well on a piece of cloth flying from a lofty perch. The complex heraldic patterns generally contravene the tenets of good flag design highlighted by the Flag Institute which state.

Remember, the design must be distinctive when flying on a high pole in a strong wind, and when hanging in windless conditions too. Also remember that it will almost always have ripples caused by the wind.

Same examples of county flags are below. How many can you name? 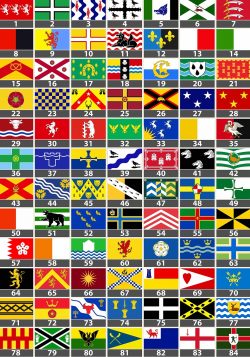