When most people think of flags they tend to imagine their national flag. The study of flags is known as vexillology and is wildly popular and comes up regularly in television programmes such as The Big Bang Theory and, um, no wait… that’s about it really!

However, like most things, flags have a history. Long before they were fabric, either in rectangle, quadrangle or square form, they were referred to as “Standards.” They were made of hard material and used to denote military sections on a battlefield as far back as 753 BC. They are thought to have been started by the Romans who in mass battle would use them in order to separate themselves from any enemy. These Standards were often very tall and carried by some unfortunate soul into the battlefield so that they could been seen from afar so any arrows etcetera being shot into the mix would be able to see the general areas to try and avoid.

Over time the hardened Standard became softer and easier to carry but was still used to symbolise something. Currently it’s believed that the oldest flag still in existence is known as the Shahdad Standard and said to have been created in around 2400BC. Unbelievably, it bears all the recognisable markings of today’s flags such as a pole and an image. In this case it’s a rain goddess. 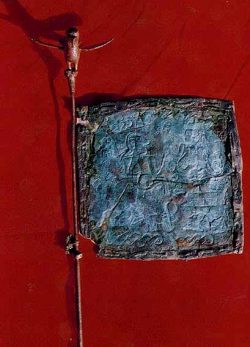 Flags are now, erm, cough, the standard for national imagery as well as many business and military originations. It even has its own language! Flag semaphore is a way of passing on messages and having conversations that originated and is still used today in the maritime world.

The oldest recorded national flag is the flag of Demark. The white cross on red background was created in 1625 and the size altered to its current square shape in 1748 and remains unchanged to this day.

Flags remain as popular today as they have ever been and in a world of technical advancements it’s nice to see that some things remain over the centuries. Good job too really as otherwise Piggotts Flags & Branding Ltd wouldn’t exist!