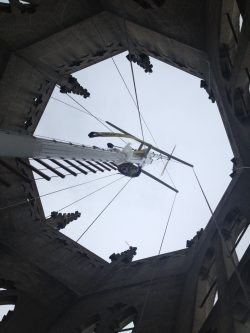 In Ramsgate there is an ancient Church known as St George the Martyr Church which has been a focal point for the local community for more years than anyone can count.

In December 2013 in a freak accident, caused by Santa Claus and his reindeer, the pole at the top was knocked over. At least it’s believed that it was Santa Claus as that is how the local Church tells the story to everyone. An accident obviously: maybe Rudolph’s nose wasn’t as bright that night!

Anyway, the Church and the insurance company called upon Piggotts to create a flag pole for its replacement. This was not a small undertaking as the pole itself is 15 metres and we had to source the wood which is a Douglas fir that had to be shipped over to us. When it arrived into our warehouse we had to carve it into the correct shape and size.

Piggotts did a case study on the pole itself and the carving of it which can be found here: Hand-crafted 15-metre flagpole in Ramsgate, Kent.

The pole itself, once carved and painted, was completed at the back end of 2016. Once the pole was completed, we moved onto repairing the weathervane that sat atop the pole.

Once the flag pole and weathervane were complete it took a while to get all the various other parts to come together to then get it placed back on the Church’s spire which sits some 80 feet above ground level. A crane was needed, plus all the relevant permits from local authorities.

Piggotts delivered the 15 m pole by lorry on Tuesday 25th July and had to assemble it in the Church courtyard ready for lifting. On Wednesday the 26th July 2017 the crane arrived and was set up and our team from Piggotts, along with help, took several hours to lift the 15 m pole, plus rigging and the weathervane and put it back in its rightful place and returned the Church to its former glory.

However, at the end of a very long day, the pole was lifted into place and had to be secured. This meant having a team of people lead by our own MD, Leigh Jessiman, who actually stood on top of the Church spire securing the rigging in place. By the end of the next day, everything was completed and almost three-and-a-half years since Santa Claus knocked the pole over, it’s now standing proud upon the Church spire.